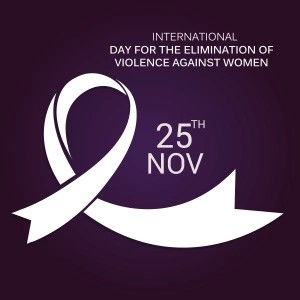 A Day for the Elimination of Violence Against Women

Women’s rights activists have observed 25 November as a day against gender-based violence since 1981. This date was selected to honour the Mirabal sisters, three political activists from the Dominican Republic who were brutally murdered in 1960 by order of the country’s ruler, Rafael Trujillo (1930-1961).

Violence against women and girls is one of the most widespread violations of human rights. According to the United Nations, 35% of women and girls globally experience some form of physical and or sexual violence in their lifetime with up to seven in ten women facing this abuse in some countries.

The United Nations General Assembly has designated 25 November International Day for the Elimination of Violence against Women, and has invited governments, international organisations and NGOs to organise on that day activities designated to raise public awareness on the problem (resolution 54/134 of 17 December 1999).

Women’s activists have marked 25 November as a day against violence since 1981. The date came from the brutal 1961 assassination of the three Mirabal sisters, political activists in the Dominican Republic, on orders of Dominican ruler Rafael Trujillo.

In South Africa, 25 November is also the starting day of the 16 Days of Activism for No Violence against Women and Children.

The Optima Psychiatric Hospital, a healing centre, situated in the Bloemfontein suburb, Hospitaalpark, accommodating 81 patients and is operated by a company consisting of nine partners, all Psychiatrists.